It was named after the statue La Défense de Paris by Louis-Ernest Barrias, which was erected in 1883 to commemorate the soldiers who had defended Paris during the Franco-Prussian War (wikipedia)

Although outside of the 20 arrondisements, La Défense is accessible by the main East-West (Yellow) Metro Line “#1” which travels into Paris, under the Arc de Triomphe, the Louvre and far east to Port de Vincennes (think Charlie Hebdo)

The Grande Arche de la Défense, one of Paris’s modern architectural wonders, lines up perfectly with the Louvre, down the Champs Elysee through the Arc de Triomphe 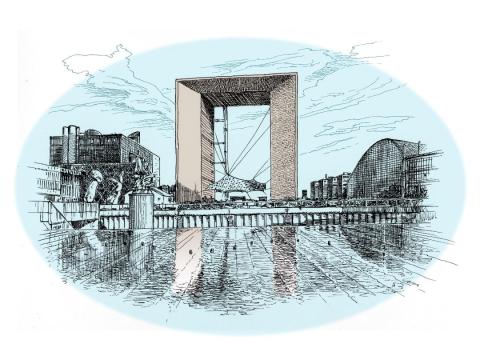 A public plaza filled with public art, landscaping and fountains extends between the Grande Arche and the Esplanade de La Défense Metro. Some of our besting running originates from this plaza

Like the summit of the “butte Montmartre”, La Défense sits on high ground looking over Paris with a perfect perspective of the Eiffel Tower. We visualize this being our perch from which to watch Paris at midnight, New Years Eve. Although that is yet to happen