In Paris, we run
One year we tried to run the Paris Marathon 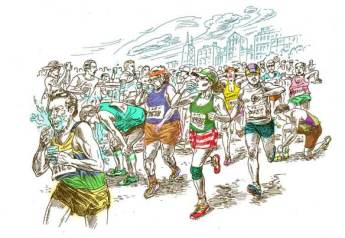 While planning each year’s itinerary, running determines the framework
Other activities fit around these important runs

We run:
-with the Let’s Run Paris meetup group
-in the Gardens of Versailles
-through the Parks of La Defense

Let’s Run Paris!
Our introduction to running in Paris came by joining this Meet Up Group
As it turns-out, their night runs don’t always square with our Paris-Clock, where we rise and hurry to be one of the first-to-be -in-the-door at museums every morning. By the end of the day, we’ve braved enough of the cold, raced about the city and are not inclined to ride the Metro to meet the group. We do enjoy their periodic invitations and run Paris vicariously through Let’s Run Paris!
However, we enjoy their Saturday morning group RUN

So we stage our own RUN. When in Versailles we are up before dawn when The Gardens open and make a loop on a path around the canal. You will be aghast just to be in this historic space, usually teaming with tourists, and to have it all to yourself. A simple pleasure.

On New Years Day, the day of our departure, we also schedule a RUN before dawn. At this hour you don’t know if the people you see are coming or going. One year we ran along the Seine to the experience the Eiffel Tower when practically no one is there except the street sweepers with their long brooms. Another year our hotel in La Defense provided a card with jogging route across the Seine, onto an island then through a large green area. An orienteering adventure in the dark, where we eventually had to ask some of the last NYE revelers for directions. An invigorating start to the new year.