Generally, Picpus is open Tuesday-Sunday,
From October to mid-April it is open 2-4
Closed Monday 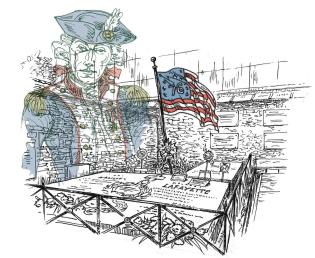 1794 Executions
Between June 14 and July 18, 1794, one thousand three hundred and six (1,306) men and women were guillotined at Place de la Nation (previously named Place du Trône, renamed then Place de Trône-Renversé)
as many as 55 a day

just a few short blocks away, What had been a local neighborhood garden soon became a series of mass graves for the decapitated bodies from the guillotine
The cemetery is reserved only to the family members of the victims

It is composed of an enclosure closed off from the public and an adjoining small cemetery, visible through the metal gate which separates it from the main cemetery.
The enclosure holds two mass graves