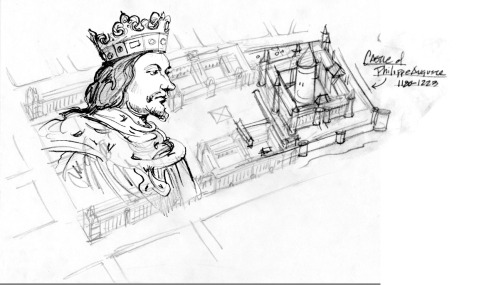 Known for:
Remnants of this Wall appear in Salle Saint-Louis
https://www.louvre.fr/en/routes/living-louvre
The Wall of Philip II Augustus built around Paris before he went to the Crusades

Also:
had the main thoroughfares paved,
built a central market, Les Halles,
continued the construction begun in 1163 of Notre-Dame de Paris,
constructed the Louvre as a fortress, and
gave a charter to the University of Paris in 1200
(the first city of teachers the medieval world knew)
(wikipedia)

Known for Battle of the Wines, a great wine tasting (70 samples) which he commissioned, as told by notable poem, never translated from French

Interred in the Basilica of St Denis 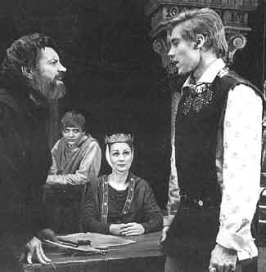 https://www.chicagotribune.com/news/ct-xpm-2006-05-14-0605130002-story.html
The Louvre has been standing on the River Seine for more than 800 years, first as a medieval fortress built around 1190 by the crusading King Philippe Auguste (Philip II) and then as a rambling royal palace on which a long chain of French artists and architects put their marks. The kings of France were insatiable collectors, so when the palace opened as a museum in 1793 a treasure trove became the property of the French people.

Kings and Queens of France

One thought on “Philip II of France”