We’ve attended two church concerts:
One in Sainte-Chapelle, which is a little counter-productive because you won’t see the world-class stained glass windows at night, but it’s a relatively small, cold, dark and even the bad seats were good.

The second was at Saint-Sulpice, Mozarts Requiem on New Years Eve. Times Square had nothing on the open seating SNAFU where the concept of waiting-in-line is very free-form. Arrive early and don’t even try to count the number of people who try to cut-in-front of you. The Performance: EXCELLENT

We found that for the price of “Primo” seating, we could buy seats at Opera Comique on a Sunday afternoon, a strong dose of Paris, with a local audience. Worth a Look 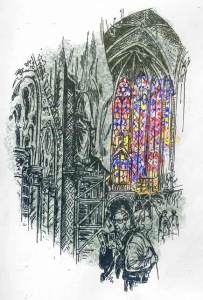