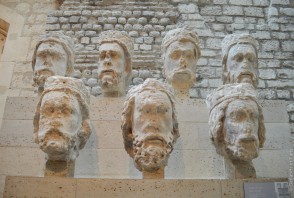 We obviously love Paris, the culture and history
Of special interest is its restoration

Before Victor Hugo authored the Hunchback of Notre Dame the cathedral was not the Jewel in the Crown of Paris
Before the Louvre Pyramid (1989) there was a Parking Lot, before the parking lot – a fascinating history
Before the Boulevards of Paris, Baron Haussmann seriously remodeled Paris (and moved lots of people out) this during the second-half of the 19th century
Eugène Viollet-le-Duc restored much of Paris, especially the damage incurred during the French Revolution
(many objects and statutes, even the Bells of Notre Dame were melted-down for ammunition)

After decapitating Marie Antoinette, Parisians “defaced” and knocked-off-the-heads of some statutes “Kings” above the portals of Notre Dame
(as it turns-out, these were not the Kings of Paris, but the Kings of Judea)
The cathedral was eventually restored and the heads replaced.
The original “heads” (eventually found in a 1970s landfill) currently reside in the Musée de Cluny known as the “Musée national du Moyen Âge – Thermes et hôtel de Cluny” (National Museum of the Middle Ages – Cluny thermal baths and mansion)

Missing Heads of the Kings from Notre-Dame de Paris