King and Queens of Paris
Monarchs ruled the Kingdom of France from the establishment of Francia in 509 to 1870, except for certain periods from 1792 to 1852. 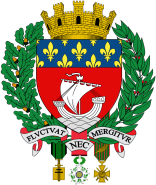 “[She] is tossed [by the waves], but does not sink”
(Fluctuat nec mergitur)