(Ham and butter on baguette)
On the 2018 BBC series, Remarkable Places to Eat, they feature a Sandwich Shop in Paris
It serves Jambon Beurre, a classic simple French sandwich of Ham with Butter on a Baguette, perhaps with cornichons.
The show reveals how they obtain the best ham, the best baguette, the best butter – how the proprietors come from upscale business careers to focus on this simple, but outstanding shop. 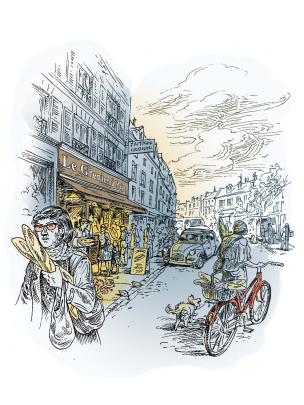 So yesterday in Chicago, I ordered “The Parisian,” a Jambon Beurre at La Boulangerie, next to Lycée Français de Chicago  -a private French international school (so it must be good, right?). When I ordered sandwiches for a Cubs game last year, my baseball buddy (a very picky sandwich eater) said “too much bread.” I forgot how slow they are at putting the order together.

This is not going to be a good review. I sat on the curb to eat my Jambon Beurre, lots of bread in relation to the ham. The baguette looked like a baguette, but was soft and chewy. The square of ham was shiny and not very generous, very unremarkable. 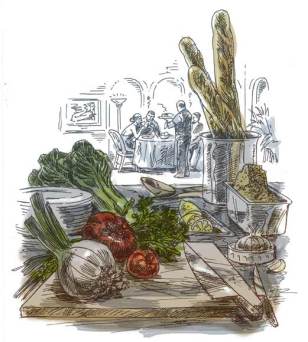 Several weeks before, I bought some sandwiches at Marianos supermarket, choosing the marked-down items approaching expiration. I ordered four sandwiches, and didn’t remember the contents of my fourth sandwich until I ate it. It was ham and it was delicious. But it was Great Ham, not a shiny thin square, but hand sliced pieces of ham which was so memorable.

A Ham Sandwich can be great. Paris has an abundance of Ham (maybe Ham & Cheese, and mustard)

My favorite Jambon Beurre was in St. Dennis (before I knew this sandwich was called a “Jambon Beurre”) This is not a touristy part of Paris despite the presence of the Basilica Cathedral of Saint Denis. My lunch options were limited, I walked into a nondescript shop, very plain (industrial cafeteria/butcher shop motif) I remember it was so plain, the menu was limited so I ordered a ham sandwich. The ladies were so nice as I requested mustard in my barely passable french. But the sandwich . . . . was REALLY GOOD! (“Très Bon”)